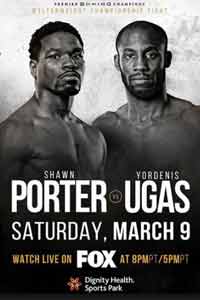 Review by AllTheBestFights.com: 2019-03-09, great performance by both boxers: Francisco Santana vs Abel Ramos gets three stars.

Francisco Santana entered this fight with a record of 25-6-1 (12 knockouts) and he is ranked as the No.34 welterweight in the world but he lost two out of his last three fights, against Jose Benavidez (Jose Benavidez vs Francisco Santana) and Mahonry Montes (via split decision); after this bout he came back to win in 2018 with Felix Diaz (Felix Diaz vs Francisco Santana).
His opponent, Abel Ramos, has a boxing record of 23-3-2 (18 KOs=78%) and he entered as the No.70 in the same weight class. He fought six times last year losing against Jamal James (Jamal James vs Abel Ramos) but then he has won seven consecutive fights. Santana vs Ramos is on the undercard of Shawn Porter vs Yordenis Ugas. Watch the video and rate this fight!