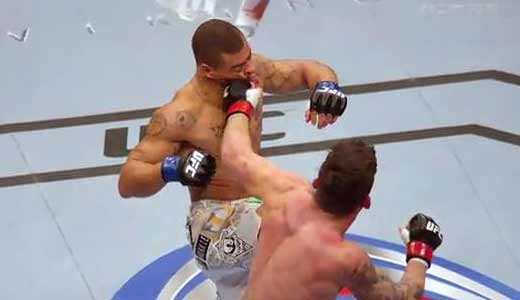 Review: 2014-02-01, very exciting and tough fight with some brutal and wild exchanges (UFC Fight of the Night): Jamie Varner vs Abel Trujillo is definitely one of the best mma fights of the year and it gets four stars (it could be also a candidate for “Fight of the Year” honors and get five stars if there are no better fights in 2014). The former WEC lightweight champion Jamie Varner entered this fight with a record of 21-8-1 (85% finishing rate) and he is ranked as the No.38 lightweight in the world, he fought just once in 2013 losing to Gleison Tibau.
His opponent, Abel Trujillo, has a record of 11-5-0 (63% finishing rate) and he entered as the No.56 in the same weight class, in 2013 he suffered his last defeat against #9 lightweight Khabib Nurmagomedov but seven months later he defeated Roger Bowling. Varner vs Trujillo is on the undercard of Renan Barao vs Urijah Faber 2 – UFC 169. Watch the video and rate this fight!

Video: (Free embeddable highlights video hosted on 8bitsports.net and not uploaded by AllTheBestFights, to report it please visit this link where the video is hosted)