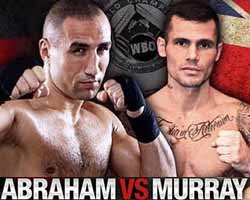 Review by AllTheBestFights.com: 2015-11-21, good fight between Arthur Abraham and Martin Murray: it gets three stars but we hope to see a rematch…

Arthur Abraham entered this fight with a pro boxing record of 43-4-0 (29 knockouts) and he is ranked as the No.1 super middleweight in the world. He suffered his last defeat in 2013 when he faced Robert Stieglitz in their second bout (=Abraham vs Stieglitz 2), but since then he has won seven consecutive fights taking revenge on Stieglitz in 2014 (=Stieglitz vs Abraham 3) and also in 2015 (=Abraham vs Stieglitz 4).
His opponent, Martin Murray, has a record of 32-2-1 (15 knockouts) and he entered as the No.7 in the same weight class. He has already fought four times in 2015 losing to #1 Mw Gennady Golovkin (=Golovkin vs Murray) but then he has won the other three bouts beating Jose Miguel Torres in his last one (=Murray vs Torres). Abraham vs Murray is valid for the WBO World super middleweight title (Abraham’s fifth defense). Watch the video and rate this fight!