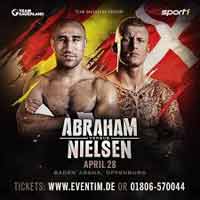 Review by AllTheBestFights.com: 2018-04-28, fight not so exciting between Arthur Abraham and Patrick Nielsen: it gets two stars.

The former Ibf Mw and Wbo super-Mw champion Arthur Abraham entered this fight with a boxing record of 46-6-0 (30 knockouts) and he is ranked as the No.8 super middleweight in the world (currently the #1 in this division is George Groves). He fought twice last year beating Robin Krasniqi (Abraham vs Krasniqi) and losing to Chris Eubank Jr (Chris Eubank Jr vs Arthur Abraham).
His opponent, Patrick Nielsen, has an official record of 29-2-0 (14 knockouts) and he entered as the No.52 in the same weight class. He also fought twice in 2017 winning the first bout, with Beibi Berrocal, but then he was defeated by John Ryder (Patrick Nielsen vs John Ryder). Abraham vs Nielsen is valid for the vacant WBO International super middleweight title. Watch the video and rate this fight!