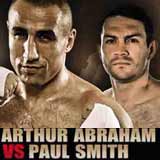 Review: 2014-09-27, close fight thanks to a good performance by both boxers: Arthur Abraham vs Paul Smith gets three stars. Arthur Abraham entered this fight with a pro boxing record of 40-4-0 (28 knockouts) and he is ranked as the No.4 super middleweight in the world (currently the #1 in this division is Andre Ward); he suffered his last defeat at the beginning of 2013 when he faced for the second time Robert Stieglitz (=Abraham vs Stieglitz 2) but after this bout he won four consecutive bouts and he took revenge on Stieglitz in 2014 in their third fight (=Stieglitz vs Abraham 3).
His opponent, Paul Smith, has a record of 35-3-0 (20 knockouts) and he entered as the No.38 in the same weight class, he suffered his last defeat in 2011 when he faced George Groves (=Groves vs Smith), since then he has fought and won four times. Abraham vs Smith is valid for the WBO super middleweight title (Abraham’s second defense), first world title shot for Smith. Watch the video and rate this fight!

Their second and next fight: Arthur Abraham vs Paul Smith 2