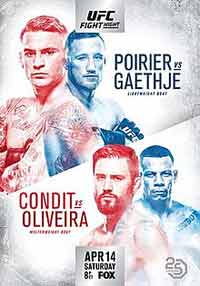 Review by AllTheBestFights.com: 2018-04-14, some good singles shots between Israel Adesanya and Marvin Vettori but it is not enough to get three stars: it gets two.

The undefeated former Glory kickboxing fighter Israel Adesanya entered this fight with a perfect mma record of 12-0-0 (100% ko/tko victory rate – he has never won via submission) and he is ranked as the No.63 middleweight in the world. In his last three bouts he has beat Melvin Guillard, Stuart Dare and Rob Wilkinson.
His opponent, Marvin Vettori, has a record of 12-3-1 (83% finishing rate) and he entered as the No.52 in the same weight class. He lost to Antonio Carlos Jr in 2016, but then he defeated Vitor Miranda and drew with Omari Akhmedov in 2017. Adesanya vs Vettori is on the undercard of Dustin Poirier vs Justin Gaethje – UFC on Fox 29; they also faced each other a second time on June 12, 2021 (Israel Adesanya vs Marvin Vettori 2). Watch the video and rate this fight!

(Free embeddable video hosted on Youtube and not uploaded by AllTheBestFights)
https://www.youtube.com/watch?v=js0em2glqnE