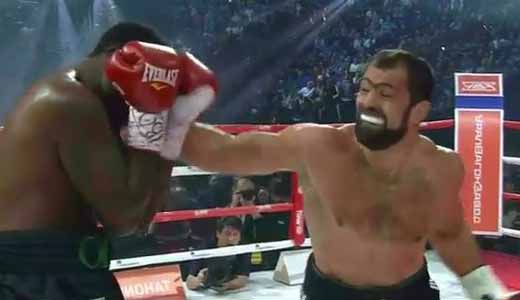 Review by AllTheBestFights.com: 2015-11-04, crazy fight with some wild and tough exchanges and a spectacular finish: Rakhim Chakhkiev vs Ola Afolabi is one of the best boxing fights of the year 2015 and it gets four stars!

The 2008 Olympic heavyweight gold medalist Rakhim Chakhkiev entered this fight with a boxing record of 24-1-0 (18 KOs=75%) and he is ranked as the No.7 cruiserweight in the world (currently the #1 in this division is Grigory Drozd). He suffered his only loss in 2013, against Krzysztof Wlodarczyk (=Wlodarczyk vs Chakhkiev) but then he has won eight consecutive bouts beating Hamilton Ventura in his last one (=Chakhkiev vs Ventura).
His opponent, Ola Afolabi, has an official record of 21-4-4 (10 knockouts) and he entered as the No.24 in the same weight class but he comes off the loss against Victor Emilio Ramirez (=Afolabi vs Ramirez). Chakhkiev vs Afolabi is valid for the IBO World cruiserweight title (Chakhkiev’s first defense); undercard of Alexander Povetkin vs Mariusz Wach. Watch the video and rate this fight!