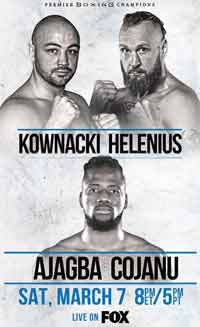 Review by AllTheBestFights.com: 2020-03-07, pretty good finish between Efe Ajagba and Razvan Cojanu but it is not enough to get three stars: it gets two.

The undefeated former Olympian Efe Ajagba entered this fight with a perfect boxing record of 12-0-0 (10 KOs=83%) and he is ranked as the No.22 heavyweight in the world. In his last three fights he has won over Michael Wallisch (Efe Ajagba vs Michael Wallisch), Ali Eren Demirezen (Efe Ajagba vs Ali Eren Demirezen) and Iago Kiladze (Efe Ajagba vs Iago Kiladze).
His opponent, Razvan Cojanu, has an official record of 17-6-0 (9 knockouts) and he entered as the No.215 in the same weight class. He lost four consecutive bouts between 2017 and 2019, the last one with Daniel Dubois (Daniel Dubois vs Razvan Cojanu) but then he has beat Tamaz Zadishvili. Ajagba vs Cojanu is on the undercard of Adam Kownacki vs Robert Helenius. Watch the video and rate this fight!