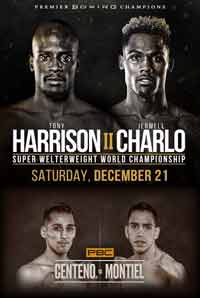 Review by AllTheBestFights.com: 2019-12-21, heavy exchanges between Efe Ajagba and Iago Kiladze: it gets three stars.

The undefeated former Olympian Efe Ajagba entered this fight with a perfect boxing record of 11-0-0 (9 KOs=82%) and he is ranked as the No.23 heavyweight in the world. In his last three fights he has won over Amir Mansour (Efe Ajagba vs Amir Mansour), Michael Wallisch (Efe Ajagba vs Michael Wallisch) and Ali Eren Demirezen (Efe Ajagba vs Ali Eren Demirezen).
His opponent, Iago Kiladze, has a record of 26-4-1 (18 knockouts) and he entered as the No.99 in the same weight class but his last victory occurred in 2017 when he defeated Pedro Julio Rodriguez, since then he has collected three consecutive defeats, the last one against Joe Joyce (Joe Joyce vs Iago Kiladze), and he tied with Robert Alfonso. Ajagba vs Kiladze is on the undercard of Tony Harrison vs Jermell Charlo 2. Watch the video and rate this fight!