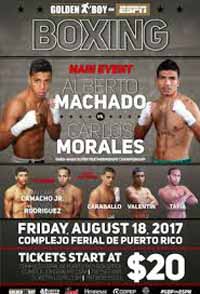 Review by AllTheBestFights.com: 2017-08-18, some good shots between Alberto Machado and Carlos Morales but it is not enough to get three stars: it gets two.

The undefeated Alberto Machado entered this fight with a perfect record of 17-0-0 (15 KOs=88%) and he is ranked as the No.18 super featherweight in the world. In his last two bouts he has beat Orlando Rizo and Juan Jose Martinez.
His opponent, Carlos Morales, has a boxing record of 16-1-3 (6 knockouts) and he entered as the No.48 in the same weight class. He suffered his only loss at his first professional fight, against Allan Benitez, since then he has collected three draws and 16 consecutive victories. Alberto Machado vs Carlos Morales is the main event of the evening. Watch the video and rate this fight!