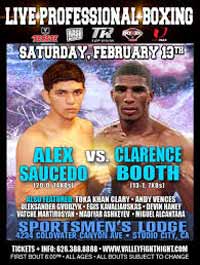 Review by AllTheBestFights.com: 2016-02-13, pretty good fight between Alex Saucedo and Clarence Booth: it gets three stars.

The undefeated Alex Saucedo entered this fight with a perfect record of 20-0-0 (14 knockouts) and he is ranked as the No.56 welterweight in the world while his opponent, Clarence Booth, has a boxing record of 13-1-0 (7 knockouts). Saucedo fought four times last year beating Angel Martinez in his last fight while Booth suffered his only loss in 2011 when he faced Cletus Seldin, since then he has won 11 consecutive bouts. ‘El Cholo’ Saucedo vs Booth is the main event of the evening. Watch the video and rate this fight!