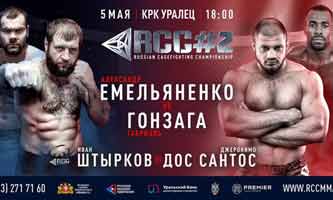 Review by AllTheBestFights.com: 2018-05-05, pretty good finish between Alexander Emelianenko and Gabriel Gonzaga but it is not enough to get three stars: it gets two.

The three-time world Combat Sambo champion Aleksander Emelianenko entered this fight with a pro mma record of 26-7-0 (88% finishing rate) and he is ranked as the No.33 heavyweight in the world. He suffered his last loss when he faced Dmitriy Sosnovskiy in 2014 (Aleksander Emelianenko vs Dmitriy Sosnovskiy), since then he has beat Geronimo Dos Santos, Virgil Zwicker and Szymon Bajor.
His opponent, the black belt in Brazilian jiu-jitsu Gabriel Gonzaga, has a record of 17-11-0 (94% finishing rate) but he is not ranked as he hasn’t fought since April 10, 2016 when he was defeated by Derrick Lewis (Derrick Lewis vs Gabriel Gonzaga); before this bout ‘Napao’ Gonzaga had won over Konstantin Erokhin (Gonzaga vs Erokhin). Alexander Emelianenko vs Gonzaga is the main event of Russian Cagefighting Championship 2 – RCC 2. Watch the video and rate this fight!