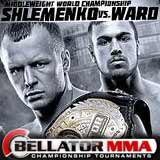 Review: 2014-03-28, very nice fight and good finish: Alexander Shlemenko vs Brennan Ward gets three stars. Alexander Shlemenko entered this fight with a professional mma record of 49-7-0 (73% finishing rate) and he is ranked as the No.11 middleweight in the world, he suffered his last defeat in 2010 when he faced Hector Lombard (who won via unanimous decision), since then he has collected 12 consecutive wins; last year he won and then successfully defended the Bellator Mw title two times.
His opponent, Brennan Ward, has an official record of 9-1-0 (89% finishing rate) and he entered as the No.57 in the same weight class, he is 25 years old (four years younger than Shlemenko) and last year he fought five times losing only his first fight against Aaron Johnson. Shlemenko vs Ward, main event of Bellator 114, is valid for the Bellator middleweight title (Shlemenko’s third defense). Watch the video and rate this fight!