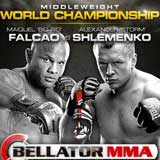 Review: 2013-02-07, fight not particularly exciting between Alexander Shlemenko and Maiquel Jose Falcao Goncalves: two stars. Alexander Shlemenko (46-7-0) entered as the No.19 middleweight in the world while Maiquel Jose Falcao Goncalves (31-4-0) entered as the No.31. Shlemenko vs Maiquel Falcao is valid for the vacant Bellator middleweight title (Hector Lombard vacated the title on April 24, 2012); main event of Bellator 88. Watch the video!

Where: The Arena at Gwinnett Center, Duluth, Georgia, USA