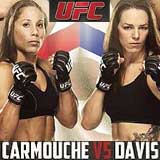 Review: 2013-11-06, fight not particularly exciting between Liz Carmouche and Alexis Davis: it gets two stars. Liz Carmouche (9-3-0, 89% finishing rate) entered as the No.8 women’s bantamweight in the world while Alexis Davis (14-5-0, 64% finishing rate) entered as the No.2 (currently the #1 in this weight division is Ronda Rousey). Carmouche vs Davis is on the undercard of Tim Kennedy vs Rafael Natal – UFC Fight for the Troops 3. Watch the video!