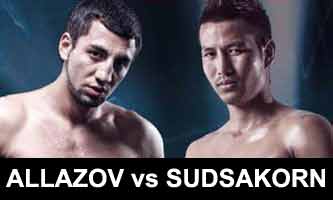 Review by AllTheBestFights.com: 2018-01-27, some good single shots between Chingiz Allazov and Sudsakorn Sor Klinmee but it is not enough to get three stars: it gets two.

The former Wako-Pro and current K-1 super-Mw world champion Chingiz Allazov entered this fight with a professional kickboxing record of 50-2-0 (32 knockouts) and he is ranked as the No.6 super welterweight in the world. ‘Chinga’ Allazov suffered two consecutive losses between 2013 and 2014, against Marat Grigorian (=Allazov vs Grigorian) and Sitthichai Sitsongpeenong, but then he has won 25 consecutive bouts beating Yasuhiro Kido (=Allazov vs Kido), Dzhabar Askerov and Cedric Manhoef in his last three.
His opponent, the former Wmc, Wpmf and Wkn muay thai world champion Sudsakorn Sor Klinmee, has an official record of 281-49-4 (68 knockouts) but he lost twice in 2017, in january with Jimmy Vienot and in December against Vasil Sorokin; between these two bouts Sudsakorn won seven fights. Allazov vs Sudsakorn is the main event of Thai Boxe Mania 2018. Watch the video and rate this fight!

first round missing (we hope to find a better video soon)