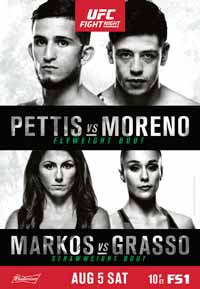 Review by AllTheBestFights.com: 2017-08-05, disappointing fight between Sam Alvey and Rashad Evans: it gets two stars.

Sam Alvey entered this fight with a mma record of 30-9-0 (70% finishing rate) and he is ranked as the No.30 middleweight in the world. He has already fought twice in 2017 defeating Nate Marquardt and losing to Thales Leites.
His opponent, the black belt in Bjj, gaidojutsu and former Ufc light-Hw champion Rashad Evans, has an official record of 19-6-1 (47% finishing rate) and he entered as the No.33 in the same weight class but he lost five out of his last seven bouts: in 2016 against Glover Teixeira (=Teixeira vs Evans) and in 2017 against Daniel Kelly (=Evans vs Kelly). Rashad Evans vs Sam Alvey is on the undercard of Sergio Pettis vs Brandon Moreno – UFC Fight Night 114. Watch the video and rate this fight!