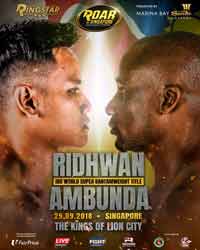 Review by AllTheBestFights.com: 2018-09-29, close fight but not so exciting: Muhamad Ridhwan vs Paulus Ambunda gets two stars.

The undefeated Muhamad Ridhwan entered this fight with a perfect record of 11-0-0 (8 knockouts) and he is ranked as the No.21 super bantamweight in the world. In his last three fights he has won over Nataneal Sebastian, Jeson Umbal and Rivo Rengkung.
His opponent, the former Olympian and former world champion in two different weight classes Paulus Ambunda, has a boxing record of 26-2-0 (11 knockouts) and he entered as the No.30 in the same weight class. He lost to Moises Flores in 2016 but then he has beat Tasha Mjuaji and Nasibu Ramadhan. Ridhwan vs Ambunda is valid for the vacant IBO World super bantamweight title. Watch the video and rate this fight!

Ridhwan vs Ambunda starts at 40:00 (we hope to find a better quality video)