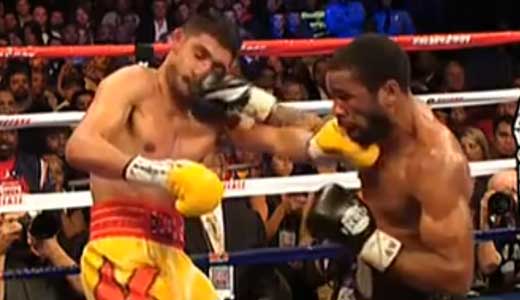 Review: 2011-12-10, great start with one knockdown in the first round, high pace for twelve rounds, speed and explosiveness: Amir Khan vs Lamont Peterson is one of the best boxing fights of 2011. Compubox punching statistics showed that Khan landed a total of 238 of 757 punches (31% accuracy rate) compared to 226 of 573 for Peterson (39%); we scored 113-112 in favour of Khan…controversial ending… Amir Khan (26-1-0) entered as the No.2 light welterweight in the world while Lamont Peterson (29-1-1) entered as the No.6. Khan vs Peterson is valid for the WBA and IBF light welterweight titles. Watch the video!