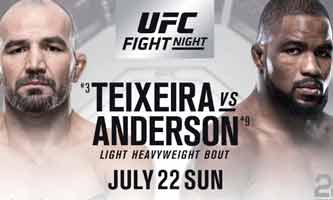 Review by AllTheBestFights.com: 2018-07-22, good fight between Glover Teixeira and Corey Anderson; it gets three stars.

The black belt in Kajukenbo and Brazilian jiu-jitsu Glover Teixeira entered this fight with a pro mma record of 27-6-0 (85% finishing rate) and he is ranked as the No.4 light heavyweight in the world (currently the #1 in this division is Daniel Cormier). He fought three times last year beating Jared Cannonier (Teixeira vs Cannonier) and Misha Cirkunov (Glover Teixeira vs Misha Cirkunov), but between these two bouts he was defeated by Alexander Gustafsson (Gustafsson vs Teixeira).
His opponent, the Tuf 19 tournament winner Corey Anderson (who replaces Ilir Latifi), has a record of 10-4-0 (40% ko/tko victory rate – he has never won via submission) and he entered as the No.15 in the same weight class but he lost two consecutive bouts in 2017, with Jimi Manuwa (Manuwa vs Anderson) and Ovince St Preux (Ovince St Preux vs Corey Anderson); after this fight he came back to win in 2018 against Patrick Cummins (Corey Anderson vs Patrick Cummins). Teixeira vs Anderson is on the undercard of Mauricio Shogun Rua vs Anthony Smith – UFC Fight Night 134. Watch the video and rate this fight!

(Free embeddable video hosted on Youtube and not uploaded by AllTheBestFights)
https://www.youtube.com/watch?v=Cu8HT6MJIgM