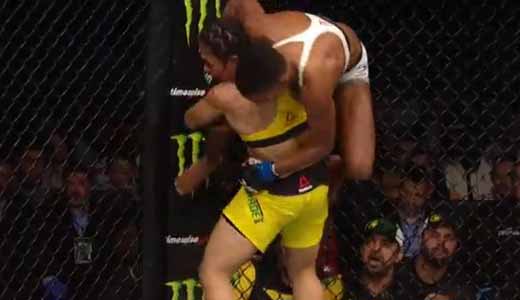 Review by AllTheBestFights.com: 2017-02-04, tough fight, high pace and some wild exchanges: Jessica Andrade vs Angela Hill is one of the best mma fight of 2017 and it gets four stars (UFC Fight of the Night).

Jessica Andrade entered this fight with a pro record of 15-5-0 (80% finishing rate) and she is ranked as the No.3 women’s strawweight in the world while her opponent, the current Invicta Fc champion Angela Hill, has an official mma record of 6-2-0 (50% ko/tko victory rate – she has never won via submission) and she entered as the No.4 in the same weight class. Both fighters suffered their last defeat in 2015: ‘Bate Estaca’ Andrade lost to Raquel Pennington but then she has won over Jessica Penne and Joanne Calderwood (=Calderwood vs Andrade) while Hill was defeated by Rose Namajunas but then she has won four bouts beating Kaline Medeiros in her last one. Jessica Andrade vs Angela Hill is on the undercard of Dennis Bermudez vs Chan Sung Jung – UFC Fight Night 104. Watch the video and rate this fight!