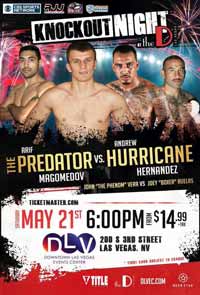 Review by AllTheBestFights.com: 2016-05-21, good fight between Arif Magomedov and Andrew Hernandez: it gets three stars.

The undefeated Arif Magomedov entered this fight with a perfect boxing record of 17-0-0 (10 knockouts) and he is ranked as the No.17 middleweight in the world. He fought four times last year defeating Derrick Webster and Jonathan Tavira in his last two.
His opponent, Andrew Hernandez, has a record of 11-4-1 (3 knockouts) and he entered as the No.73 super middleweight but he lost two out of his last three bouts, against Kyrone Davis and Ahmed Elbiali; after this fight he beat Dionisio Miranda. Magomedov vs Hernandez is valid for the vacant WBC United States (USNBC) middleweight title. Watch the video and rate this fight!