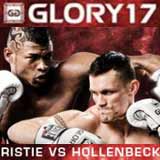 Review: 2014-06-21, fight not particularly exciting between Andy Ristie and Ky Hollenbeck: it gets two stars. Andy Ristie entered this fight with a kickboxing record of 44-4-1 (23 knockouts) and he is ranked as the No.3 super welterweight in the world, he won the Glory lightweight tournament in 2013 defeating Giorgio Petrosyan in the semifinal (=Petrosyan vs Ristie) and Robin van Roosmalen in the final (=van Roosmalen vs Ristie) but then he lost the title in 2014 when he faced Davit Kiria (=Ristie vs Kiria).
His opponent, Ky Hollenbeck, has an official record of 46-3-1 (8 knockouts) and he entered as the No.8 in the same weight class, he fought and won twice in 2013: against Albert Kraus and Warren Stevelmans. Ristie vs Hollenbeck is on the undercard of Rico Verhoeven vs Daniel Ghita 2 – Glory 17. Watch the video and rate this fight!