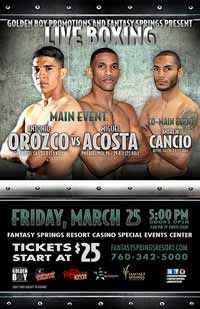 Review by AllTheBestFights.com: 2016-03-25, one sided fight between Antonio Orozco and Miguel Acosta: it gets two stars.

The undefeated Antonio Orozco entered this fight with a perfect boxing record of 23-0-0 (15 knockouts) and he is ranked as the No.15 welterweight in the world. He fought twice last year beating Emmanuel Taylor (=Taylor vs Orozco) and Humberto Soto (=Orozco vs Soto).
His opponent, the former Wba Lw champion Miguel Acosta, has a record of 29-8-2 (23 KOs=79%) but he is not ranked as he hasn’t fought since January 20, 2015 when he was defeated by Michael Perez; before this bout he had lost three consecutive fights. Orozco vs Acosta is the main event of the evening. Watch the video and rate this fight!