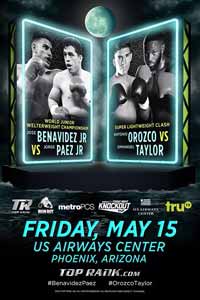 Review by AllTheBestFights.com: 2015-05-15, great performance by both boxers: Emmanuel Taylor vs Antonio Orozco gets three stars.

Emmanuel Taylor entered this fight with a pro boxing record of 18-3-0 (12 knockouts) and he is ranked as the No.27 super lightweight in the world but he lost twice last year, against Chris Algieri (=Taylor vs Algieri) and Adrien Broner (=Broner vs Taylor); between these two defeats he won with Karim Mayfield (=Mayfield vs Taylor).
His opponent, the undefeated Antonio Orozco, has a perfect record of 21-0-0 (15 knockouts) and he entered as the No.49 in the same weight class; he fought three times in 2014 beating Steve Forbes in his last bout. Taylor vs Orozco is on the undercard of Jose Benavidez vs Jorge Paez Jr. Watch the video and rate this fight!