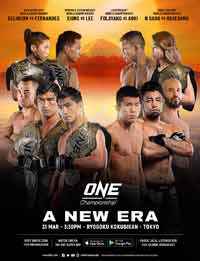 Review by AllTheBestFights.com: 2019-03-31, pretty good finish between Eduard Folayang and Shinya Aoki 2: it gets three stars.

The black belt in wushu and ONE Fc Lw champion Eduard Folayang entered this fight with a professional mma record of 21-6-0 (38% finishing rate) and he is ranked as the No.80 welterweight in the world. He was defeated by Martin Nguyen in 2017 but then he has won over Kharun Atlangeriev, Aziz Pahrudinov and Amir Khan.
His opponent, the black belt in Bjj, judo and former One Fc Lw champion Shinya Aoki, has an official record of 42-8-0 (72% finishing rate) and he entered as the No.71 in the same weight class. He lost two consecutive fights between 2016 and 2017, against Eduard Folayang (in their first bout, Aoki vs Folayang) and Ben Askren (Ben Askren vs Shinya Aoki), but then he won three bouts in 2018 defeating Ev Ting in his last one. Folayang vs Aoki 2, main event of ONE FC 93, is valid for the ONE lightweight title (Folayang’s first defense). Watch the video and rate this fight!