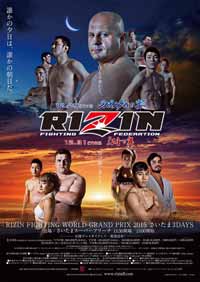 Review by AllTheBestFights.com: 2015-12-29, disappointing fight between Kazushi Sakuraba and Shinya Aoki: it gets two stars.

The first man to defeat Royce Gracie in mma history Kazushi Sakuraba (he is 46 years old, 14 years older than Aoki) entered this fight with a professional mma record of 26-16-1 (88% finishing rate) but he is not ranked as he hasn’t fought since September 9, 2011 when he was defeated by Yan Cabral (=Cabral vs Sakuraba); before this bout he had lost three consecutive bouts.
His opponent, the black belt in Brazilian jiu-jitsu and judo Shinya Aoki, has an official record of 38-6-0 (69% finishing rate) and he entered as the No.19 lightweight in the world. He suffered his last defeat in 2012 when he faced Eddie Alvarez at Bellator 66 (=Alvarez vs Aoki 2), since then he has collected eight consecutive victories winning the One Fc Lw belt against Kotetsu Boku in 2013 (=Aoki vs Boku) and defending it twice, the last one against Koji Ando (=Aoki vs Ando). Sakuraba vs Aoki is the main event of “Rizin FF 1 Saraba (Farewell) Fiesta”. Watch the video and rate this fight!