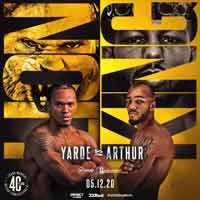 Review by AllTheBestFights.com: 2020-12-05, disappointing fight between Anthony Yarde and Lyndon Arthur: it gets two stars (take a look at our ranking of the best boxing fights of 2020).
Anthony Yarde entered this fight with a record of 20-1-0 (19 KOs=95%) and he is ranked as the No.27 light heavyweight in the world. He suffered his only loss when he faced Sergey Kovalev last year (Sergey Kovalev vs Anthony Yarde), after this bout he has beat Diego Jair Ramirez and Dec Spelman (via tko, Anthony Yarde vs Dec Spelman).
His opponent, the undefeated Lyndon Arthur, has a perfect record of 17-0-0 (12 knockouts) and he entered as the No.53 in the same weight class. In his last three fights he has won over Andrzej Soldra, Emmanuel Anim and Dec Spelman (via unanimous decision). Arthur vs Yarde is valid for the Commonwealth (British Empire) light heavyweight title. Watch the video and rate this fight!