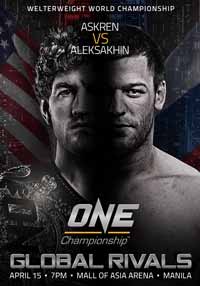 Review by AllTheBestFights.com: 2016-04-15, some good exchanges between Ben Askren and Nikolay Aleksakhin but it is not enough to get three stars: it gets two.

The undefeated former Bellator Ww champion Ben Askren entered this fight with a perfect mma record of 14-0-0 (57% finishing rate) and he is ranked as the No.20 welterweight in the world while his opponent, Nikolay Aleksakhin, has an official record of 17-3-0 (47% finishing rate). Askren won the One Fc Ww title in 2014, against Nobutatsu Suzuki (=Askren vs Suzuki), and he defended his belt once in 2015, against Luis Santos (bout ended in a no-contest Askren vs Santos) while Aleksakhin fought twice last year beating Jose de Ribamar Machado Gomes and Burenzorig Batmunkh. Askren vs Aleksakhin, main event of One Fc 40, is valid for the One Fc welterweight championship title (Askren’s seond defense). Watch the video and rate this fight!