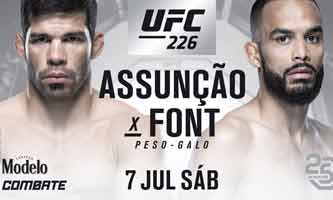 Review by AllTheBestFights.com: 2018-07-07, fight not so exciting between Raphael Assuncao and Rob Font: it gets two stars.

The black belt in Brazilian jiu-jitsu Raphael Assuncao entered this fight with a professional record of 26-5-0 (54% finishing rate) and he is ranked as the No.6 bantamweight in the world. He lost to current #1 Ufc Bw champion TJ Dillashaw in 2016 (Dillashaw vs Assuncao 2) but then he has defeated Aljamain Sterling (Sterling vs Assuncao), Marlon Moraes (Moraes vs Assuncao) and Matthew Lopez (Raphael Assuncao vs Matthew Lopez).
His opponent, Rob Font, has a mma record of 15-3-0 (73% finishing rate) and he entered as the No.21 in the same weight class. He was defeated by Pedro Munhoz last year (Munhoz vs Font) but he came back to win with Thomas Almeida in 2018 (Thomas Almeida vs Rob Font). Assuncao vs Font is on the undercard of Stipe Miocic vs Daniel Cormier – UFC 226. Watch the video and rate this fight!

(Free embeddable video hosted on Youtube and not uploaded by AllTheBestFights)
https://www.youtube.com/watch?v=mE_Ep36EV3U