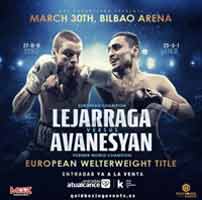 Review by AllTheBestFights.com: 2019-03-30, good performance by both boxers: Kerman Lejarraga vs David Avanesyan gets three stars.

The undefeated Kerman Lejarraga entered this fight with a perfect boxing record of 27-0-0 (22 KOs=81%) and he is ranked as the No.17 welterweight in the world. He fought three times last year winning over Bradley Skeete (Bradley Skeete vs Kerman Lejarraga), Johnny Navarrete and Frankie Gavin (Kerman Lejarraga vs Frankie Gavin).
His opponent, the former Wba Ww champion David Avanesyan, has an official record of 23-3-1 (11 knockouts) but he is not ranked as he hasn’t fought since February 16, 2018 when he was defeated by Egidijus Kavaliauskas (David Avanesyan vs Egidijus Kavaliauskas); before this bout, in 2017, he had beat Serge Ambomo. Lejarraga vs Avanesyan is valid for the EBU European welterweight title. Watch the video and rate this fight!

some rounds missing – we hope to find a better video
https://www.youtube.com/watch?v=zmOqKmJCB5k