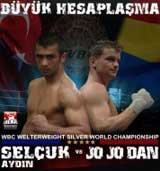 Review: 2011-11-26, even with two knockdowns the second fight between Selcuk Aydin and Ionut Dan Ion was not very spectacular: two stars (in their first fight Aydin won by split decision). The undefeated Selcuk Aydin (22-0-0) entered as the No.16 welterweight in the world while Ionut Dan Ion (29-1-0) entered as the No.30. Aydin vs Dan Ion 2 is valid for the WBC Silver welterweight title. Watch the video!