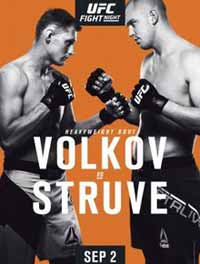 Review by AllTheBestFights.com: 2017-09-02, pretty good finish between Siyar Bahadurzada and Rob Wilkinson but it is not enough to get three stars: it gets two.

Siyar Bahadurzada entered this fight with a mma record of 22-6-1 (82% finishing rate) but he is not ranked as he hasn’t fought since March 5, 2016 when he defeated Brandon Thatch. Before this bout he had lost two consecutive fights in 2013, against John Howard and Dong Hyun Kim (=Bahadurzada vs Kim).
His opponent, the undefeated Rob Wilkinson, has a perfect record of 11-0-0 (91% finishing rate) and he fought twice last year winning over Jamie Abdallah and Alexander Poppeck. Siyar Bahadurzada vs Rob Wilkinson is on the undercard of Alexander Volkov vs Stefan Struve – UFC Fight Night 115. Watch the video and rate this fight!