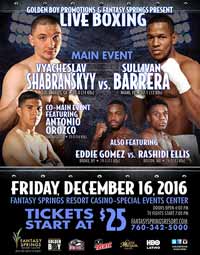 Review by AllTheBestFights.com: 2016-12-16, great performance by both boxers: Vyacheslav Shabranskyy vs Sullivan Barrera is close to get four stars!

The undefeated Vyacheslav Shabranskyy entered this fight with a perfect boxing record of 17-0-0 (14 KOs=82%) and he is ranked as the No.15 light heavyweight in the world. He has fought twice in 2016 beating Derrick Findley (=Shabranskyy vs Findley) and Oscar Riojas.
His opponent, Sullivan Barrera, has an official record of 17-1-0 (12 knockouts) and he entered as the No.38 in the same weight class but he comes off the loss against Andre Ward (=Ward vs Barrera); before this bout he had won with Karo Murat (=Barrera vs Murat). ‘Slava’ Shabranskyy vs Barrera is valid for the vacant WBC United States (USNBC) light heavyweight title. Watch the video and rate this fight!