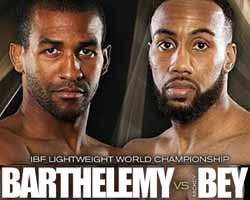 Review by AllTheBestFights.com: 2016-06-03, pretty good fight between Rances Barthelemy and Mickey Bey: it gets three stars.

The undefeated world champion in two different weight classes Rances Barthelemy entered this fight with a perfect boxing record of 24-0-0 (13 knockouts) and he is ranked as the No.1 lightweight in the world. He fought three times last year beating Angino Perez (=Barthelemy vs Perez), Antonio DeMarco (=Barthelemy vs DeMarco) and Denis Shafikov (=Barthelemy vs Shafikov).
His opponent, the former Ibf Lw champion Mickey Bey, has an official record of 22-1-1 (10 knockouts) and he entered as the No.12 in the same weight class. He lost to John Molina Jr in 2013 (=Molina vs Bey) but since then he has won four bouts defeating Naim Nelson in his last one. Barthelemy vs Bey is valid for the IBF World lightweight title (Barthelemy’s first defense). Watch the video and rate this fight!