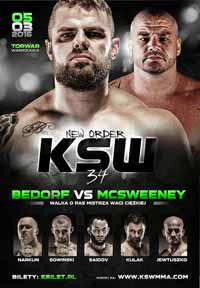 Review by AllTheBestFights.com: 2016-03-05, Karol Bedorf vs James McSweeney gets three stars only thanks to a good finish.

The Ksw Hw champion Karol Bedorf entered this fight with a pro record of 13-2-0 (54% finishing rate) and he is ranked as the No.30 heavyweight in the world. He suffered his last loss when he faced Rogent Lloret in 2011, since then he has collected seven consecutive victories beating Peter Graham (=Graham vs Bedorf) and Michal Kita in 2015 (=Bedorf vs Kita).
His opponent, James McSweeney, has an official mma record of 15-13-0 (100% finishing rate) and he entered as the No.59 in the same weight class but he won just one out of his last three bouts, against Marcin Rozalski. ‘Coco’ Bedorf vs McSweeney, main event of Ksw 34, is valid for the KSW heavyweight title (Bedorf’s third defense). Watch the video and rate this fight!