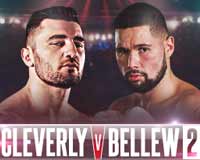 Review: 2014-11-22, good fight between Nathan Cleverly and Tony Bellew: it gets three stars. Nathan Cleverly entered this fight with a professional boxing record of 28-1-0 (14 knockouts) and he is ranked as the No.14 cruiserweight in the world, he suffered his only loss in 2013 when he faced the undefeated Sergey Kovalev losing his Wbo light-Hw title (=Cleverly vs Kovalev); after this bout he moved up in weight class to the cruiserweight division beating Shawn Corbin and Alejandro Valori (=Cleverly vs Valori).
His opponent, Tony Bellew, has an official record of 22-2-1 (14 knockouts) and he entered as the No.11 in the same weight class, he lost in 2013 as well, against Adonis Stevenson, in a bout valid for the Wbc light-Hw belt (=Stevenson vs Bellew), but then he has won two fights: against Valery Brudov (=Bellew vs Brudov) and Julio Cesar Dos Santos (=Bellew vs Dos Santos). In their first bout Cleverly defeated Bellew via majority decision (=Cleverly vs Bellew I); this second fight is the main event of the evening. Watch the video and rate this fight!