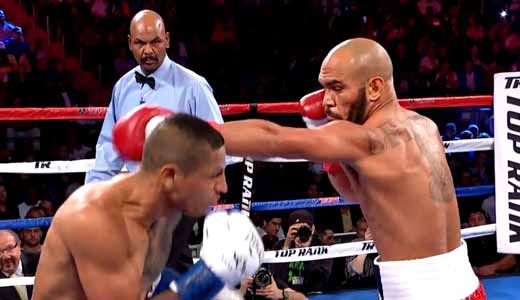 Review by AllTheBestFights.com: 2017-05-20, heavy exchanges and spectacular finish: Raymundo Beltran vs Jonathan Maicelo is one of the best boxing fights of 2017 and it gets four stars!

Raymundo Beltran entered this fight with a pro record of 32-7-1 (20 knockouts) and he is ranked as the No.10 lightweight in the world (currently the #1 in this division is Jorge Linares). He suffered his last loss when he faced Terence Crawford in 2014 (=Crawford vs Beltran), since then he has collected one no-contest and three victories over Ivan Najera, Miguel Angel Mendoza and Mason Menard.
His opponent, Jonathan Maicelo, has an official record of 25-2-0 (12 knockouts) and he entered as the No.22 in the same weight class. He lost to Darleys Perez in 2015 (=Perez vs Maicelo) but then he has won four bouts beating Brandon Bennett, Samuel Amoako, Ramesis Gil and Jose Felix Jr (=Felix Jr vs Maicelo). Raymundo Beltran vs Jonathan Maicelo is valid for the vacant WBA International, NABF and WBO NABO lightweight titles; undercard of Terence Crawford vs Felix Diaz. Watch the video and rate this fight!