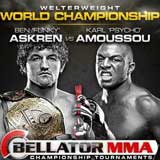 Review: 2013-01-24, pretty good fight with a great second round: Ben Askren vs Karl Amoussou gets three stars. The undefeated Ben Askren (10-0-0) entered as the No.12 welterweight in the world while Karl Amoussou (16-4-2) entered as the No.26. Askren vs Amoussou, main event of Bellator 86, is valid for the Bellator welterweight title (Askren’s third defense). Watch the video!