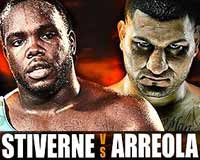 Review: 2014-05-10, great fight thanks to a good pace and some tough exchanges: the second fight between Bermane Stiverne and Chris Arreola gets three stars. Bermane Stiverne entered this fight with a professional boxing record of 23-1-1 (20 KOs=87%) but he is not ranked as he hasn’t fought since April 27, 2013 when he defeated Arreola in their first bout (=Arreola vs Stiverne I). Stiverne suffered his only defeat in 2007 when he faced Demetrice King, since then he has collected 11 wins and one draw.
His opponent, Chris Arreola, has an official record of 36-3-0 (31 KOs=86%) and he entered as the No.6 heavyweight, after the loss against Stiverne he has fought and won once defeating Seth Mitchell in the first round (=Mitchell vs Arreola); currently the #1 in this division is Wladimir Klitschko. Stiverne vs Arreola 2 is valid for the vacant WBC heavyweight belt, title vacated at the end of 2013 by Vitali Klitschko who stepped back from boxing to focus on the 2014 Ukrainian Presidential Election (he was granted emeritus status by the Wbc so he can fight for the title again at his first bout if he returns to boxing). Watch the video and rate this fight!