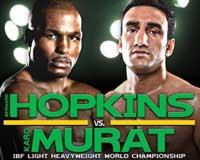 Review: 2013-10-26, probably the most exciting thing of this fight was Hopkins’ entrance, disappointing bout: Bernard Hopkins vs Karo Murat gets two stars. The 48-year-old Bernard Hopkins ranked as the No.1 light heavyweight in the world, entered the fight with a record of 53-6-2 (32 knockouts) while Karo Murat had a record of 25-1-1 (15 knockouts – Murat is not ranked as he hasn’t fought since June 2, 2012 when he defeated Sandro Siproshvili). Hopkins vs Murat is valid for the IBF light heavyweight title (Hopkins’ first defense). Watch the video!

(alternative free embeddable video hosted on Kinostok.tv and it was not uploaded by AllTheBestFights, to report it please visit this link where the video is hosted)