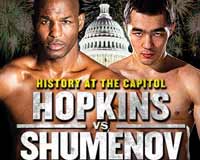 Review: 2014-04-19, just some good single shots but it is not enough to gets three stars: Bernard Hopkins vs Beibut Shumenov gets two. Bernard Hopkins entered this fight with a professional boxing record of 54-6-2 (32 knockouts) and he is ranked as the No.1 light heavyweight in the world, he is 49 years old (19 years older than Shumenov) and he is the current IBF light-Hw champion. He suffered his last defeat in 2012 in the rematch against Chad Dawson (via majority decision Dawson vs Hopkins 2) but after that bout he managed to defeat then-undefeated Tavoris Cloud winning the Ibf belt (=Hopkins vs Cloud) and then he successfully defended his title against Karo Murat (=Hopkins vs Murat).
His opponent, Beibut Shumenov, has an official record of 14-1-0 (9 knockouts) and he entered as the No.26 in the same weight class, he suffered his only defeat (via majority decision) in 2009 when he faced for the first time Gabriel Campillo but he managed to defeat the spanish boxer in the rematch five months later (by split decision); last year he fought just once defeating then-undefeated Tamas Kovacs. Hopkins vs Shumenov is valid for the WBA, IBF and IBA light heavyweight titles. Watch the video and rate this fight!