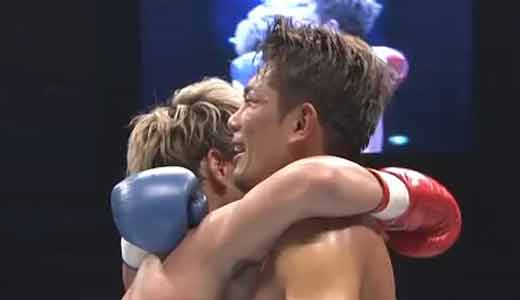 Review by AllTheBestFights.com: 2018-12-08, tremendous exchanges between two Japanese warriors in a high pace fight: Takeru vs Koji is one of the best kickboxing fights of 2018 and it gets four stars!

The K-1 world champion in three different weight classes Takeru Segawa entered this fight with a pro kickboxing record of 35-1-0 (21 knockouts) and he is ranked as the No.1 super featherweight in the world. His only loss occurred when he faced Kyotani Yuki in 2012, but it was a doctor stoppage technical decision, since then he has won 30 consecutive bouts defeating Stauros Exakoustidis, Masanobu Goshyu, Kosuke Komiyama and Daniel Puertas Gallardo in 2018.
His opponent, the former Iska Lw champ Koji (also known as Kouzi), has an official record of 25-12-0 (9 knockouts) and he has already fought three times in 2018 beating Hirotaka Urabe and Stauros Exakoustidis but between these two fights he lost to Kosuke Komiyama. Takeru vs Koji, main event of K-1 WGP 2018 Japan, is valid for the K-1 super featherweight title (Takeru’s first defense). Watch the video and rate this fight!