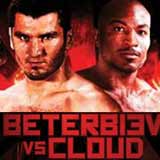 Review: 2014-09-27, nice and tough exchanges between Tavoris Cloud and Artur Beterbiev: it gets three stars. Tavoris Cloud entered this fight with a boxing record of 24-2-0 (19 KOs=79%) and he is ranked as the No.12 light heavyweight in the world but he comes off two consecutive defeats, both in 2013: he was beat by Bernard Hopkins in March, losing his Ibf light-Hw title (=Hopkins vs Cloud), and by Adonis Stevenson in September (bout valid for the Wbc belt, Stevenson vs Cloud).
His opponent, the undefeated 2009 world amateur champion Artur Beterbiev, has a record of 5-0-0 (5 KOs=100%) and he entered as the No.96 in the same weight class. Cloud vs Beterbiev is valid for the vacant NABA light heavyweight title. Watch the video and rate this fight!