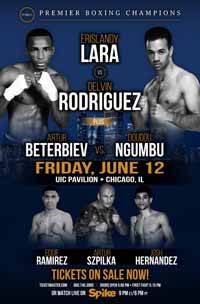 Review by AllTheBestFights.com: 2015-06-12, fight not so exciting between Artur Beterbiev and Alexander Johnson: it gets two stars.

The undefeated 2009 world amateur boxing champion Artur Beterbiev entered this fight with a pro boxing record of 8-0-0 (8 KOs=100%) and he is ranked as the No.6 light heavyweight in the world (currently the #1 in this division is Sergey Kovalev). In his last three bouts he beat Tavoris Cloud (=Cloud vs Beterbiev), Jeff Page Jr (=Beterbiev vs Page) and Gabriel Campillo (=Beterbiev vs Campillo).
His opponent, Alexander Johnson, has a record of 16-2-0 (7 knockouts) and he entered as the No.86 in the same weight class. He fought twice last year losing to Eleider Alvarez and defeating Henry Buchanan. Beterbiev vs Johnson is on the undercard of Erislandy Lara vs Delvin Rodriguez. Watch the video and rate this fight!