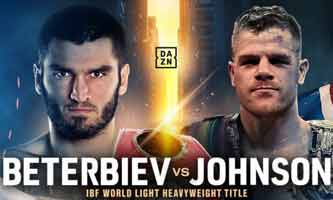 Review by AllTheBestFights.com: 2018-10-06, heavy exchanges between Artur Beterbiev and Callum Johnson: it gets three stars.

Both undefeated, the former Olympian and current Ibf light-Hw champion Artur Beterbiev entered this fight with a perfect boxing record of 12-0-0 (12 KOs=100%) and he is ranked as the No.8 light heavyweight in the world (currently the #1 in this division is Eleider Alvarez) while his opponent, Callum Johnson, has an official record of 17-0-0 (12 knockouts) and he entered as the No.21 in the same weight class. In their last three bouts Beterbiev has won over Ezequiel Osvaldo Maderna (Beterbiev vs Maderna), Isidro Ranoni Prieto (Beterbiev vs Prieto) and Enrico Koelling (Artur Beterbiev vs Enrico Koelling) while Johnson has beat Norbert Szekeres, Willbeforce Shihepo and Frank Buglioni (Frank Buglioni vs Callum Johnson). Beterbiev vs Johnson is valid for the IBF World light heavyweight title (Beterbiev’s first defense); undercard of Jessie Vargas vs Thomas Dulorme. Watch the video and rate this fight!