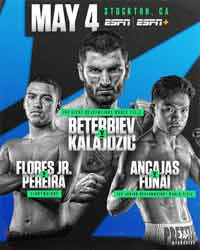 Review by AllTheBestFights.com: 2019-05-04, some good exchanges between Artur Beterbiev and Radivoje Kalajdzic but it is not enough to get three stars: it gets two.

The undefeated former Olympian and current Ibf light-Hw champion Artur Beterbiev entered this fight with a perfect boxing record of 13-0-0 (13 KOs=100%) and he is ranked as the No.6 light heavyweight in the world (currently the #1 in this division is Sergey Kovalev). In his last three bouts he has won over Isidro Ranoni Prieto (Beterbiev vs Prieto), Enrico Koelling (Artur Beterbiev vs Enrico Koelling) and Callum Johnson (Artur Beterbiev vs Callum Johnson).
His opponent, Radivoje Kalajdzic, has an official record of 24-1-0 (17 knockouts) and he entered as the No.54 in the same weight class. He suffered his only loss when he faced Marcus Browne in 2016 (via split decision, Marcus Browne vs Radivoje Kalajdzic), since then he has beat Travis Peterkin, Brad Austin and Alex Theran. Beterbiev vs Kalajdzic is valid for the IBF World light heavyweight title (Beterbiev’s second defense). Watch the video and rate this fight!

(Free embeddable video hosted on dailymotion and not uploaded by AllTheBestFights)