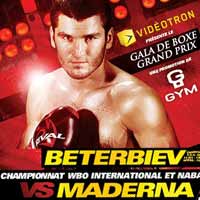 Review by AllTheBestFights.com: 2016-06-04, disappointing fight between Artur Beterbiev and Ezequiel Maderna: it gets two stars.

The 2009 world amateur boxing champion Artur Beterbiev entered this fight with a perfect boxing record of 9-0-0 (9 KOs=100%) and he is ranked as the No.9 light heavyweight in the world (currently the #1 in this division is Sergey Kovalev). He fought twice last year beating Gabriel Campillo (=Beterbiev vs Campillo) and Alexander Johnson (=Beterbiev vs Johnson).
His opponent, Ezequiel Osvaldo Maderna, has an official record of 23-2-0 (15 knockouts) but he is not ranked as he hasn’t fought since May 22, 2015 when he defeated Rolando Wenceslao Mansilla. His two losses occurred in 2013 against Edwin Rodriguez and Thomas Oosthuizen. Beterbiev vs Maderna is valid for the WBO International and WBA-NABA light heavyweight titles. Watch the video and rate this fight!