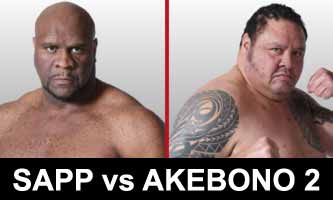 Bob Sapp entered this fight with a kickboxing record of 11-17-0 (9 knockouts) while his opponent, the former sumo wrestler Akebono Taro, has an official record of 1-8-0 (654-232-181 in sumo). Both fighters have lost their last three bouts; in their first bout Sapp defeated Akebono in just one round (December 31, 2003). ‘The Beast’ Sapp vs Akebono 2 is on the undercard of Fedor Emelianenko vs Singh Jaideep – Rizin FF 2. Watch the video and rate this fight!