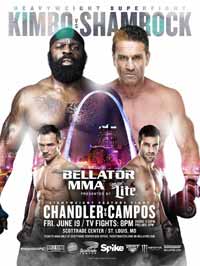 Review by AllTheBestFights.com: 2015-06-19, fight not particularly good between Bobby Lashley and Dan Charles: it gets two stars.

The WWE wrestler Bobby Lashley entered this fight with a mma record of 12-2-0 (75% finishing rate) and he is ranked as the No.64 heavyweight in the world. His last loss occurred in 2012 when he faced James Thompson (=Thompson vs Lashley), since then he has won five bouts winning over Karl Etherington in his last one (=Lashley vs Etherington).
His opponent, Dan Charles, has a record of 9-2-0 (78% finishing rate); he suffered two consecutive defeats in 2013 but then he came back to win in 2014 beating Stuart Austin and James Wilson. Lashley vs Charles is on the undercard of Kimbo Slice vs Ken Shamrock – Bellator 138. Watch the video and rate this fight!